Bringing the daf to life - is what Daf Hachaim is all about. 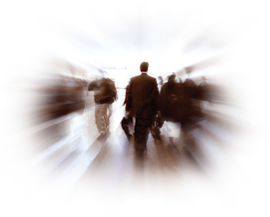 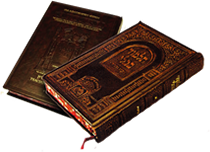 We live in a time in which we are inundated and overstimulated
with multi media and electronic gadgets that have left many
with attention spans that are woefully inadequate to delve into
the depth of the Torah - especially Torah Sh’Baal Peh, with its
intricate reasoning, and often complicated arguments.

This, together with the many pres-
sures that the modern world has
heaped upon today’s typical baal
habayis, has left him with precious
little energy and concentration
needed to maintain a serious learning
program.

At the same time, Hashem has blessed us with
numerous invaluable tools that have
opened the hearts and minds of
so many that would otherwise
have given up on learning alto-
gether.

Shiurim on almost any given subject have
become available at every turn. Innovative seforim from
Artscroll, Oz V’Hodor, and others have begun a revolution in
Torah learning for our generation. However, many - actually too
many - still find it hard to stay committed, and often feel unful-
filled with quick-paced Torah learning programs.

With today’s advanced technol-
ogy, many have begun explor-
ing how these technologies can
be redirected to help advance
Jewish education and
improved Torah study, espe-
cially through Visual Learning.

The power of visual learning to enhance
comprehension and retention of newly
learned material has long been reco-
gnized. Studies have shown, that the more
senses that are stimulated during a learning session, the higher
the rate of understanding and retention.

Rav Chei, a talmud muvhok of Reb Moshe Feinstein zt”l, related how Reb Moshe told him that the reason he was able to remember so much of what he learned, was because learning to him was a complete experience - visualizing in his mind, images of the scenarios mentioned. He based this on the Mishne in Avos פרק ג‘ משנה י - אמר רבי ינאי כל השוכח דבר אחד ... שנאמר פן תשכח את הדברים אשר ראו עיניך - that when you are able to see something in your mind, you will not easily forget it.

Animated videos have recently
become increasingly popular as
extremely effective teaching tools. At
the forefront of this movement in the
Jewish world has been Rabbi Chaim
Shmuel Friedman, who took the Torah
world by storm upon the release of
numerous powerful educational videos
and presentations - ranging from the
ground breaking 3D Animated Bais Hamikash, Birchas Hachamah,
Kiddush Hachodesh and Hilchos Treifos with Rabbi Yisroel Belsky,
shlita. Besides the visual impact of these striking presentations,
educators have praised the clarity and organization with which
these unfamiliar and complicated subjects were presented.

Building on those successfully developed programs, Rabbi Friedman along with the vision and guidance of Mr. Chesky Kauftheil of Mishkan Yecheskel, have developed a revolutionary three step program of studying and retaining the Blatt through visual learning.

The One Minute Intro

How many times have we sat down to listen to a shiur or even to learn on our own, only to feel lost after a short time because we lacked some background information, or simply could not figure out what was being said and the direction in which the gemora taking us. In the Introduction to the Daf, the maggid shiur gives us a concise outline of all the important concepts the gemora will be discussing. In addition, we also see his words come alive, as they are animated and illustrated on the screen alongside him.

For our initial English language shiurim we are fortunate to have one of the truly rising stars in the Yeshiva/Chinuch world, Rabbi Shlomie Schwartzberg. He is a highly respected member of the Lakewood community, and a much sought after lecturer for various Yeshivos, Bais Yaakovs, and kiruv organizations. He has dedicated himself to giving a well prepared, clear and organized shiur on the daf. His Torah knowledge and warm personality come through in each of the three elements of the Daf Hachaim program.

All shiurim are recorded in a professional recording studio to ensure a clear and crisp presentation.

No matter how well a shiur was presented and how well we were able to stay focused, a review of the daf is critical. Review not only help us remember, it also enhances our understanding as well. However, reviewing can be difficult, especially after we’ve closed the gemora and moved on to our daily routine.

The Daf Review, is designed to change all that. The maggid shiur presents a well thought out, concise, “concept centered” review, along with animated charts, illustrations and photos. The Review section is an essential component of our learning. The incredible gift of a comprehensive review in just 5 minutes will also inject a heightened level of enthusiasm for reviewing the Daf as well. Learners can easily grab any five minutes of free time during the day to review the Daf over and over again - inscribing the Daf visually and conceptually in our minds.